Tetanus in Dogs- causes and treatments

What is Tetanus infection?

Humans are well acquainted with the term tetanus. We all have had a tetanus shot at least once in life. Tetanus is an infectious disease occurring after the transmission of bacteria Clostridium tetani. We are supposed to get tetanus shots after a metal cut, a wound exposed to soil, a dirty cut, or a bite wound. Another term for Tetanus infection is lockjaw. There is not much known about this infection, which makes it a little tricky to tackle it. The toxins secreted by bacteria affect the nervous system of dogs, which can lead to painful stiffening and paralysis of the dog’s jaw, neck, and other muscles. The Tetanus infection-causing bacteria are anaerobic, meaning that they grow in no oxygen environment, such as a deep bite wound or puncture. Clostridia tetani are soil bacteria; they live in dirt. Dirt is the classical tetanus-yielding source. People get such injuries by working at places like farms or factories, where there might be nails on the ground or an open metal wire. Dogs can get tetanus while rolling in the dirt with an open wound or a fight with another dog leading to bite wounds.

In medical terms, the toxin attaches itself to local nerves and moves up into the central nervous system where it hinders the release of Glycine( an amino acid) that also acts as an inhibitory neurotransmitter. As a result, the overactive muscles become painful, rigid, and spasms occur.

If you are wondering about the odds of your dog getting tetanus, dogs are less likely to get a tetanus infection. All animal species have a different sensitivity to the tetanus neurotoxin. Horses, humans, and livestock are more sensitive to tetanus, and dogs are less sensitive. Even though the chances are low, it is good to stay on top of things. Dogs are less likely to contract the disease, but they are not immune to it. 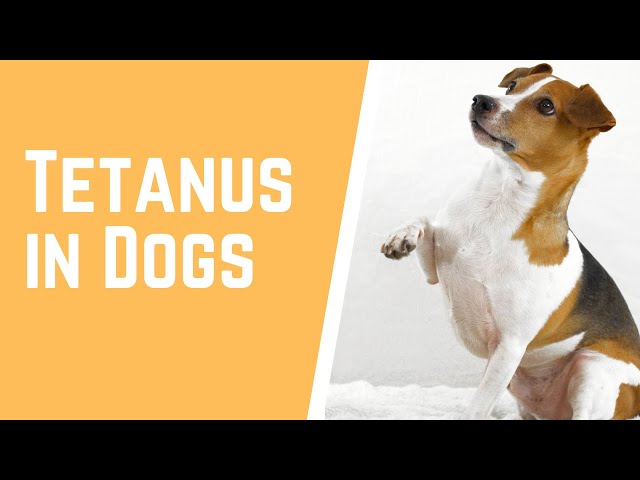 The symptoms of tetanus are not easy to notice. Sometimes they may not even appear for several weeks. Generally, the wound gets healed by the time the symptoms appear, so you may not know what is causing those effects. However, a veterinary professional can help you out. It is best to be a step ahead and take your dog to the veterinarian as you suspect a sign of tetanus. Look out for the following symptoms-

Any dog can get infected with tetanus, but some dog breeds are more susceptible to it than others.

• Age of the dog (between three months to two years old)
• Dogs that spend most of their time outdoors in playgrounds or farms
• Large breeds like the German shepherd, Labradors retrievers

How is it diagnosed

The tetanus diagnosis is based on the common symptoms. Only a veterinary professional can give you a concrete diagnosis. The veterinarian will do a complete physical examination by- first looking for an injury or the sight of the infections. Second, the veterinarian will check your dog’s heart rate, blood pressure, weight, temperature, and reflexes. The vet will be very gentle with your pet and may use sedation if it seems like the examination is causing too much pain and stress because of the hypersensitivity to touch.

The laboratory tests that can confirm a tetanus infection include a chemistry profile, complete blood count, and a urinalysis. The chemistry levels of an infected dog will usually show an increased amount of creatine phosphokinase (CPK). The blood count will have an increased number of white blood cells. The urinalysis reports may show protein in the urine due to the muscle contractions. Another test to help diagnose tetanus infection is electromyography, which records the electrical activity of the muscles.

The treatment for tetanus starts with a general course. The first step is antibiotics, as they can kill the Clostridia toxin. Exotic antibiotics are not needed to treat tetanus. Your good friend penicillin does the trick. Sedation and anti-seizure medications may be used in addition to antibiotics to control muscle spasms and seizures.

Nursing care is the keystone of tetanus treatment for dogs. It requires a dark room with minimal disturbance and soft bedding to prevent bedsores. The clenched jaws caused by tetanus make it difficult for them to consume solid food, so a liquid diet or slurry is needed.

Some improvement is seen within the first week of therapy, but complete recovery can easily take up to a month.

The recovery of your dog depends on many factors like the stage of infection when your dog received treatment, age, health history. Nothing is predictable if your dog was already showing severe side effects upon arrival at the clinic, such as respiratory failure. When you take your dog home from nursing care, keep him in a dark and quiet area. You will need to spend at least a week carefully observing your pet to be sure there are no left symptoms or side effects. A follow-up with your veterinarian in about a week for another examination is a must to be sure of your dog’s health.

The common question is, why can’t dogs get a tetanus shot? Tetanus toxoid is a tetanus shot us humans have taken at least once in our lives. It is a vaccine against tetanus neurotoxin and an important part of the human vaccination set. Dogs are much more resistant to tetanus than humans. Therefore, a regular vaccination against tetanus is not recommended for them. Also, tetanus is not a common occurrence in dogs. This is why a tetanus shot is not a part of the dog vaccination set. But again, the potential does exist, and it is always good to know about possible diseases. You never know what kind of medical mischief your dog will get in.

And receive our mega deals